In the first of Fulci's trilogy (the others being The Beyond and House By The Cemetery), a preacher hangs himself, waking up a bunch of dead folk and generally cause mayhem and mischief himself. A reporter, a woman who previously died, and a therapist who dates high school girls set out to stop it. Brains are squished like one of those stress relieving balls. It's pretty neat-o.

Six Things I've Learned from City of The Living Dead

1. That ain't Nestle's strawberry syrup dripping into that milk!

2. Don't pet old dead ladies because they bite and then lay around in your kitchen for no reason.

3. Never let Christopher George help you out of a coffin.

6. He's psychotic, he's so needing...he'll get your little eyeballs bleeding. Throwing up all your insides, he's got...EVIL PREACHER EYES!
Posted by Dan Lashley at 11:56 AM

Everyday, dozens of werewolves are left without victims....wandering aimlessly as they search for any person to rip apart. For just one relative a day, you too can keep a werewolf happy. Faster than a speeding (silver) bullet, please call today.

George Newman is a man of many failed jobs. When his uncle wins the deed to UHF station U62, George finds himself in the position of taking the station out of the toilet. With a little help from a mentally disabled janitor, George may prove himself yet.

1. Little known fact: Boulders are a lot like pets in that they will follow you no matter where you go. BAD BOULDER! STAY OFF THE COFFEE TABLE!! BAD!

2. Twinkie wiener sandwiches are considered a delicacy in parts of Georgia...namely my house.

3. The station ends up in the control of a hobo. Think about that for a sec.

4. A fire hose on full blast is an excellent solution for dehydration.

5. I'd really hate to live in the apartment below Raul's Wild Kingdom. 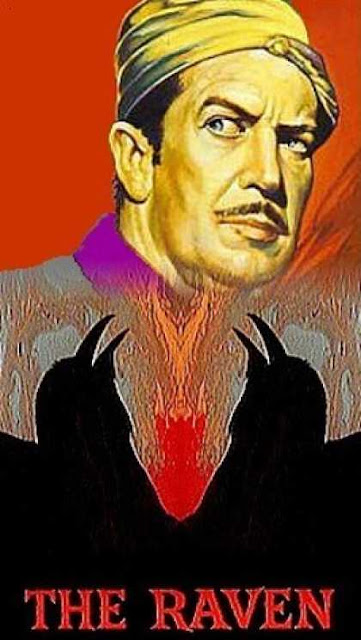 A sicko psychopath, with a mask reminicent of "Silence of the Lambs, and TCM, goes on a rampage hacking up unsuspecting victims in the woods.

6 Things I Learned from Ogroff the Axe Monster

1. You can act casual and not come across as a psychopath while wearing a bizarre mask and carting around an axe.

2. All of the cool folk play chess in the middle of a field.

3. Ogroff likes to jerk off his axe.

4. Ogroff and a random man are fighting with an axe and a chainsaw. Did this inspire the chainsaw duel in "Texas Chainsaw Massacre 2"?

5. True motorcyclists can chop off heads while driving.

6. If someone suspicious walks by your place, it's perfectly acceptable to stab them with hedge clippers.
Posted by "Cinemasochist" Justin Oberholtzer at 5:38 AM 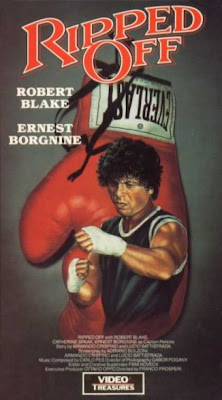 Never has a cover been so accurate. Adriannaaaaaaaaaa!!!
Posted by Dan Lashley at 5:41 PM

Up The Creek (1984)
Director: Robert Butler
Stars: Tim Matheson, Jennifer Runyon, Stephen Furst
Bob McGraw is in his 12th year of college, goofing his way through life. Bob, Irwing, Gonzer and Max are the four losers forced and bribed to represent their university in an intercollegiate raft race. Forced and bribed into this role, they make some friends, the lovely Heather Merriweather, but mostly enemies, among others a whole team of marines, and preppy IVY-leaguers determined to win.
6 Things I Learned from Up The Creek
1. Cheap Trick is up a creek. Does that count as a cheap trick?
2. If a bird is chirping, the corrective action to take is to shoot it with a bazooka.
3. Winning a raft race will get you a diploma for any major.
4. Bologna and ice cream are a great mix.
5. Tim Matheson's dog is a whore.
6. They train you how to blow up a river in the army.
Posted by "Cinemasochist" Justin Oberholtzer at 5:56 AM No comments:

No Time To Die VHS Artwork 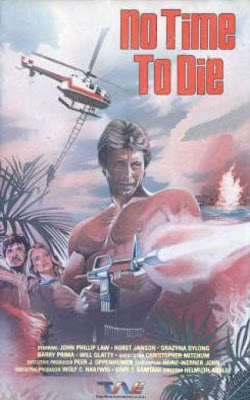 "No time to die because I have to have my neck put back in place then my shift at Chippendale's begins."
Posted by Dan Lashley at 5:49 AM No comments:

Email ThisBlogThis!Share to TwitterShare to FacebookShare to Pinterest
Labels: bad vhs artwork, no time to die

Vampire Circus (1972)
Director: Robert Young
Stars: Adrienne Corri, Thorley Walters, David Prowse
In this Hammer flick, Count Mitterhaus (a vampire) steals some guy's woman and has her sending him little kids to feed off of and kill. The villagers don't take too kindly to that and kill the  Count. He curses them and fifteen years later, the town has got the plague. As they figure out what to do, a mysterious circus comes into town. Big shock, people start dying of non plague issues. Gee I wonder who's to blame?
Six Things I Learned from Vampire Circus
1. Midget + Clown + Evil = Nightmare fuel. It's a proven equation/
2. In addition to making a great Darth Vader, David Prowse plays a mean hand organ. Ask him to play "Light My Fire" sometime.
3.When the "Funhouse" consists of three goofy mirrors and one where you die, that's grounds for false advertising.
4. People in the 19th century never question circus folk who can leap 50 feet in the air with no trampoline.
5. Mothers who fool around with vampires always tend to favor their undead children over their live ones.
6. Despite causing problems in the lovemaking department, staking a vampire in the groin generally doesn't work. Lord knows how often I've tried.
Posted by Dan Lashley at 5:28 AM No comments:

AKA Turkey Hand of Death!
Posted by Dan Lashley at 4:03 PM No comments:

Raiders of Atlantis (1983)
Director: Ruggero Deodato
Stars: Christopher Connelly, Gioia Scola, Tony King
A team of scientists working to raise a sunken Russian nuclear submarine on an ocean platform off the coast of Miami, Florida, unearth an ancient Atlantean relic from the sea floor and bring in an expert to make some sense of it. But while attempting to raise the sub, radioactive leakage from its missles triggers the re-emergence of Atlantis, and the resulting tidal wave destroys the platform and leaves only a small group of survivors.
6 Things I Learned from Raiders of Atlantis
1. Architects think it’s a good idea t install windows that lead into other rooms.
2. If you want to hide your face, a newspaper is more efficient than a mask.
3. You can crack a safe with a metal rod.
4. The raiders of Atlantis are bored punk rockers.
5. Fashion in 1994 consisted of Crystal Skull masks. Spielberg and Lucas were late to the party.
6. Atlantis has a higher crime rate than Detroit.
Posted by "Cinemasochist" Justin Oberholtzer at 4:49 PM 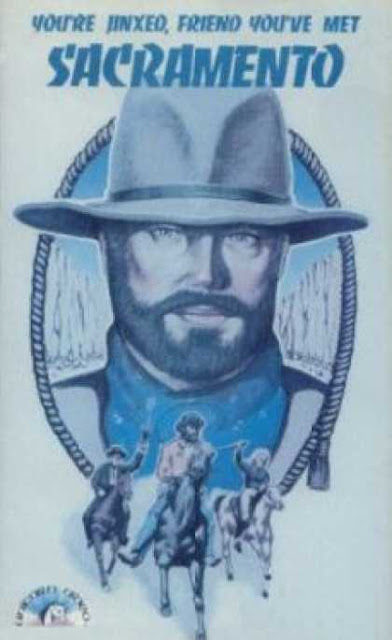 I enjoyed the sequel where Sacramento and his lady love, Ann Arbor, go to El Paso and tangle with Dallas and Austin (with their henchman Boulder) in Sacramento Vs The Texas Terrors.
Posted by Dan Lashley at 8:47 PM

1. Keeping your smelly undergarments with you turn some women on...just not the ones in the gym I go to. And by go to I mean hang around without pants on.

2. I found out how much wool it would take to knit a sweater. Around six girls.

3. Mongo only Sheriff in county of scumbags.

4. Depending on what time of day it is, the high school gloryhole is usually not crowded.

5. The county Porky's is located is made up entirely of Porky's itself, and a garage for the police to hang out in. 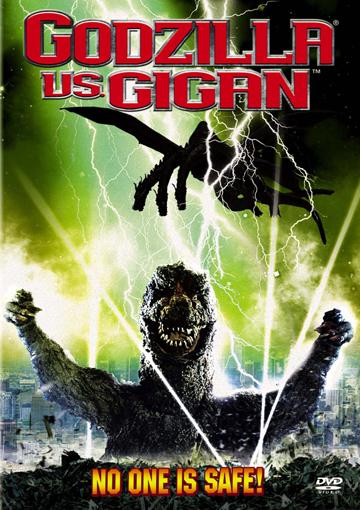 Godzilla is going to rock and roll all night... and party every day!
Posted by "Cinemasochist" Justin Oberholtzer at 7:29 AM

6 Things I Learned From Godzilla vs. Gigan

1. The Homework Monster will ruin your weekends.

2. The best place to hide incriminating tapes is in a train station pay locker.

3. Gigan was born via an exploding crystal.

6. King Ghidorah is a prick! He zaps his foes in the balls.
Posted by "Cinemasochist" Justin Oberholtzer at 7:29 AM