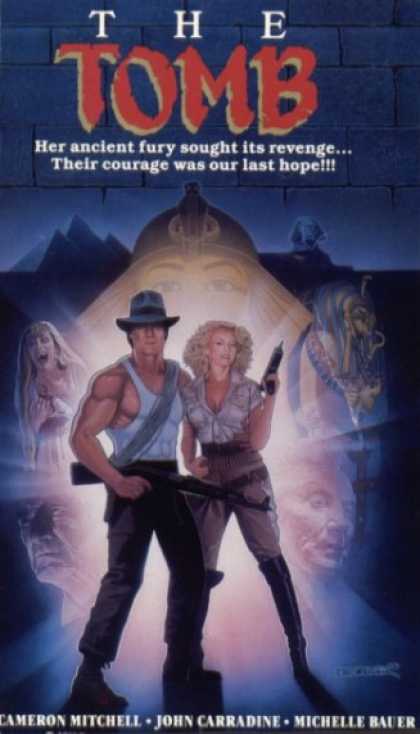 Indiana Rambo and the Temple of Sybil Danning.
Posted by Dan Lashley at 11:45 AM No comments:

Pondo Sinatra is a college student who just came off the turnip truck...I'm not joking. He actually shows up in the back of a turnip truck. He befriends a guy named Studley (man those were some confident parents!) who tries to help him with the ladies. Apparently there are no classes here, just people humping each other like rabbits. But none for Pondo, who can't even get laid in a whorehouse....no really. The whores clock out when he shows up. Pondo tries lots of wacky ways to get him some that includes a punk makeover, his buddy playing Cyrano, and a scene that'll make Cheech and Chong team up with Scarface to form an intervention. Eventually he figures out a formula that gives him a lot more than he bargained for.

That's it...Pondo trying to get laid. Well at least it stays true to the story. And there are boobies, so that's nice.

1. Pondo Sinatra sounds like a rival lounge singer in Star Wars. It may be the best lead character name not associated with an 80's action star.

2. As bad (and oddly enjoyable) as this film was, if you were a fan of 80's alternative rock, this has one of the best damn soundtracks ever. The Buzzcocks,The Fleshtones, Dream 6 (whose members would go on to form Concrete Blond), even REM...although I don't remember ever hearing them in the movie.

3. Women in dorms will gladly play a stripping card game if you dress up like an ugly girl and randomly show up in their room. I tried this one out once...of course I ended up in a male dorm. I stayed there for two years.

4. I don't know about any of you, but when I want to have someone mentor me in the ways of sex, I immediately think of the school janitor. The only thing I learned from my school janitor was how to find the best closets to cry in.

5. Fake rubber dongs are always funny...even when they are used to discuss nuclear war.

6. There's a beautiful blond woman who keeps appearing in the film followed by a crow's call. I assume she's some sort of devil figure, but I guess the movie gets bored of her because at no point in the film are we allowed to figure out why she's there. Maybe she likes unappealing guys. Who's at my window?
Posted by Dan Lashley at 4:35 PM No comments: 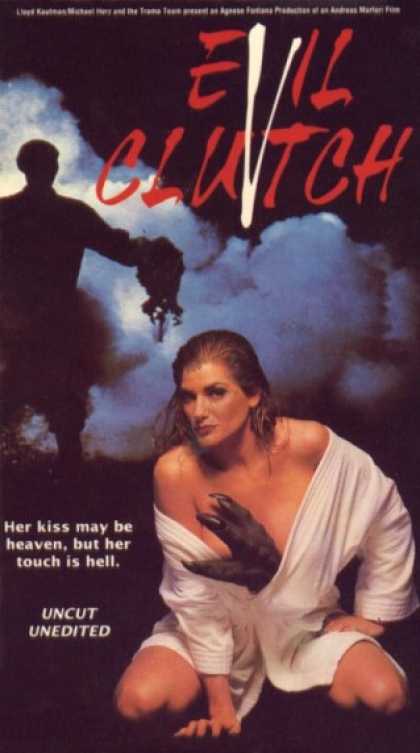 This is why it's best for some women to wear a turtleneck.
Posted by Dan Lashley at 4:34 PM No comments:

Tom Hanks plays a goofy lovable bus driver, so you know this movie is not based in reality. He's marrying the wealthy Tawny Kitaen, who is concerned about his upcoming...you guessed it... bachelor party. Tom's randomly grouped together pals try to find hookers for the party, because you want your buddy to get a venereal disease before he passes it along to his new wife. I think a set of dinnerware would be less costly.

1. Forcing a woman's child to lay down will instantly make her want to put your head near her large bosoms. Chicks dig forced naps.

2. A hot dog penis is NOT a part of a nutritional breakfast, no matter how many times you tug on it.

3. I love that this group filled it's sleazy funhouse mirror version of Woody Allen quota.

4. I've always had a bit of a crush on Tawny Kitaen. I even tried to impress her by rolling around on the hood of her car. I think she was impressed because she sped up.

5. It doesn't matter how nice the car is, it is illegal in most states to trade one in for a woman.

6. I miss moments like the heroes tying the villain to a bed buck naked, throwing him out the window, and having him fall onto a car, where his butt is welcomed with loving kisses. Attempted murder is  hilarious!
Posted by Dan Lashley at 9:50 PM No comments: 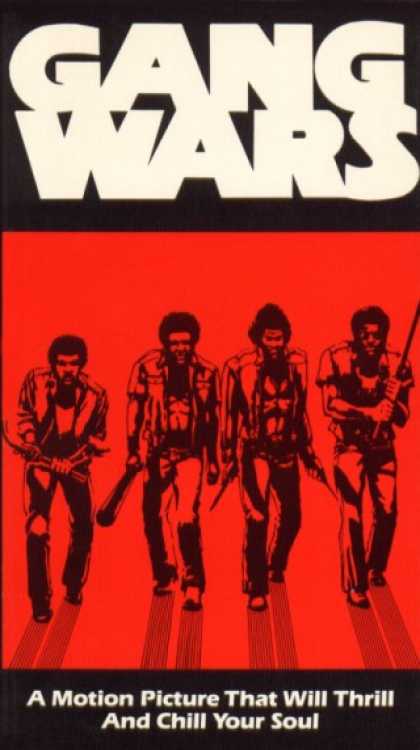 The ensemble comedy...a group of wacky misfits put together to achieve a goal. No place was safe...summer school? Not safe. summer camp? Are you kidding?! Even the hallowed police academy wasn't safe from the ragtag shenanigans.  So what do you do when you start running out of good places to put these people in? You start digging the bottom of the barrel. That's right, I'm talking about traffic school.

So the story is that a bunch of terrible drivers have their licenses revoked and must go to traffic school to get them. BUT, this traffic school is run by the dead eyed brother of Stacy Keach, who has it in for our hero...the brother of Bill Murray. Judge Hot Lips from MASH wants Stacy Keach's brother to flunk everyone so they can sell their cars off and pocket the cash. I'm sure that '79 buick is gonna fetch a pretty penny. Literally.

1. Oh look, there's a guy who likes horror movies. Let's dress him up like a teenage headbanger and make him socially disturbing. I wish there was a character that liked romantic movies . Someone who dressed up like Rudolph Valentino singing at people's windows and crying at Celine Dion songs.

2. James Keach, John Murray, Fred Willard, Jennifer Tilly, Clara Peller, that nerd who couldn't get it on with Jennifer Jason Leigh in Fast Times at Ridgemont High...all this movie needed was Jm J Bullock and we'd have ourselves a Hollywood Squares game!

3. There's a wacky mix up as a car doctor is mistaken for a regular doctor, which ends up with a woman drinking a bottle of cooking oil, greasing up her ass, and sitting naked atop a car lift. There must be a time traveler writing this script because that's my morning routine to a t.

4. Old ladies sitting in a urinal is always funny. ALWAYS.

6. John Murray was so over the top in doing his best Bill Murray impression I almost thought he was going to start yelling about cats and dogs living together. Mass hysteria indeed.

Posted by Dan Lashley at 1:23 PM No comments:

From the goofy head of Allan Arkush, director of Rock N Roll High School, comes this "off the wall" comedy about a concert on New Years Eve. Someone thought it'd be a good idea to make Daniel Stern a leading man. That person was proven wrong.

there's the barest of plots about a crazy concert promoter who looks like a coked out Bubbles from Trailer Park Boys trying to blow up the building the concert is in. It's one of those multi storyline ensemble piece like Dazed and Confused and Thank God It's Friday that just doesn't seem to work. Like Hoochie Cootchie Man? You better because they play that damn song three times in three different ways...each version worse than the last.

But boy does Malcolm McDowell make one hell of a Mick Jagger.

1. Happy to see my buddy Jimmy the giant Joint in this film. It's neat and sorta tragic to see a giant pot cigarette snuffed out in the prime of life. Guess it's better to burn out than to fade away.

2. If you encounter a bathroom shark, by all means let it use the mirror. He'll eat that guy who sits in the bathroom expecting you to pay money to wash your own damn hands and you won't be held hostage by an old man and a paper towel.

3. If I had "watch a sterotypical jewish blues band" on my bucket list, I could now cross it off. Of course if I had it on a bucket list I should probably shorten the list to hurry death up.

4. So they let Lee Ving "sing" and they stick Lou Reed in a cab writing awful songs in a nowhere plotline. Should have told me everything.

5. If some alien drug dealer pops out of nowhere with an electrified suitcase, do NOT take the drugs. I know the cocaine octopus is cute, but he ain't under the sea, he's up yer nose.

6. I witnessed the first heart to heart talk between a man and his penis. Well put on film anyways. Me yelling at my penis to stop being pee shy in the bathroom of Longhorn's probably doesn't count.
Posted by Dan Lashley at 12:54 PM No comments:

When a mercenary named Cutter accepts an assignment in Ireland, he realizes too late that his new commandos are double agents for the IRA. Enraged by the deception, Cutter exacts revenge on the soldiers who hired him to do their dirty work.

Six Things I Learned from The Ultimate Weapon

1) Hogan fights wars to run away from his problems.

2) “To be opened at death” letters are popular at military training camps.

3) Hogan sucks at proposals! He doesn’t even get down on one knee. He won’t even go down for his fiancée!

5) You can recognize a stripper by her baby pictures.