Anyone who knows anything about low/no budget movies will know the name Mark Pirro. In 1983 his $2500 budgeted film A Polish Vampire in Burbank made over a million bucks in VHS rentals and overseas distribution. I remember seeing it on USA's Up All Night while the annoying Rhonda Shear enticed me with her large boobs during the bumpers. Heh... Rhonda's bumpers. So I have a soft spot for Pirro.

Chuck Toedan is the host of the most popular show on television, Live or Die, where the contestants are dying to play. HAHAHA! Get it? Dying to...I'm an asshole I know. The contestants are death row inmates playing for a stay of execution and wonderful prizes for their families. while this may sound like the greatest show ever, not everybody is thrilled with the show. Chuck endures protests led by Gloria Steinvirgin, death threats, and recently the mafia. When a hitman shows up ready to kill him, Chuck will have to rely on his wits and his biggest enemy to live. He's pretty much screwed.

1. Inspired by Chuck and his car, I'm going to patent messages that you can put on the side of your car windows. Everything from "You're the best" to "hey you just hit a kid back there you schmuck". Can't be any worst than back window memorials.

2. Every person's dreams should be rated like Chuck's. Mine would only be suitable for small parrots and those guys who dance on the corner for money.

3. The hitman looks an awful lot like a bloated Gene Simmons. Thank goodness we didn't see a sex tape with this guy. Ugh.

4. Although Chuck is a famous game show host, he's still relegated to parking in an alleyway behind the studio.

6. I was very offended by the scene of the mob boss with his penis tied to an electric chair. Does Mark Pirro not know that every year, at least three people lose their lives by rigging their penises up to electric chairs. Let's use films to not judge these guys, but to show love and compassion for the boners they may make in life.
Posted by Dan Lashley at 5:01 PM No comments:

YOU Choose the Movies All March!

That's right, for the entire month of March, YOU the reader request what you want me to watch, and I HAVE TO DO IT! You can choose to show me mercy, or pick out the worst films of humanity to torture me with! If we have an overfill of requests then it'll spill over to the next month. Yes I hate myself that much.

There's two ways to do this...you can either comment on this post OR go to the Wide Weird World of Cult Films page on Facebook (click "Facebook" to go there) and leave a request! It's as easy as that crackhead wanting a fix offering to play nude hopscotch with you.
Posted by Dan Lashley at 1:31 PM 1 comment:

I...I don't know where to start. This movie is obviously a vehicle for the late 70's super disco group the Village People. The "plot" little as there is, is basically a retelling of how they got together. Perrine is a former supermodel living with the goofiest songwriter in history (Guttenberg). They decide to put a group together with the help of Perrine's lawyer boyfriend, Bruce Jenner. Yes, that Bruce Jenner. Acting like a low rent Christopher Reeves and going from suits to a half shirt in the blink of an eye.

Everyone involved in this film should issue an apology for taking part in this.

1. This movie was directed by the quicker picker upper lady. I'm serious. There's not enough Bounty to clean up this mess.

2. The running time is TWO FUCKING HOURS LONG. This movie had so much padding in it I took a nap on it for a half hour.

3. This film goes out of its way to not mention that these guys are gay. "Weird" or "Out There" were a couple of words used instead.

5. I never want to see Bruce Jenner in daisy dukes and a half shirt ever again.

6. The video below made me 20% gayer than I already was (was at a reasonable 3%). I've seen the scene in Shortbus where the guy sucks his own dick, and it's not as gay as this scene.

The Gayest Movie Scene in History by alabastertnt
Posted by Dan Lashley at 8:25 AM No comments:

Tony Manero (Travolta) is just a young man trying to make the best of his life. He's also a wildman, doing things like eating pizza  folded together and strutting his stuff down random streets carrying paint cans. When he's not telling people to not touch his hair, he's at the 2001 Odyssey, where he is the Lord of the Dance there.  Along the way, he has to fight off a love starved groupie, hang out with his priest brother, tries to make it with a girl even more deluded than he is, and a bridge jumping friend with an afro sure to keep him afloat,
There's dancing, the Bee Gees invade our heads for a lifetime, and...more dancing. There's a story in there too. I promise.

1. Discos hire the most unenthusiastic strippers. I haven't seen this lack of enthusiasm since I saw that stripper dancing at Shoneys. I think that was a stripper. Oh God...

2. Karen Lynn Gorney's character is a flawed one. She knows her life is crap, but she likes to pretend it isn't. She also the second most annoying character in the movie.

3. If you throw yourself at Tony Manero long enough, he'll let his friends take a crack at you in the backseat of a car. What a generous human being!

4. Guys who run dance studios make it with all the ladies. These sexual predators must be one two stop stop stopped!

5. I was sad to see the Priest brother leave. I was hoping he'd stay and become the Disco Priest. A glittery collar...bell bottom robes...a holy afro.  "And on the Sixth Day, He said...' shake shake shake your bootay'"

6. I admit that I love this film. Tony isn't a bad person, he 's just caught between what he loves to do and the realities of his life. He makes mistakes but wants to improve. However, there is Staying Alive. Fuck it, Tony Manero is pure evil!
Posted by Dan Lashley at 9:54 AM No comments: 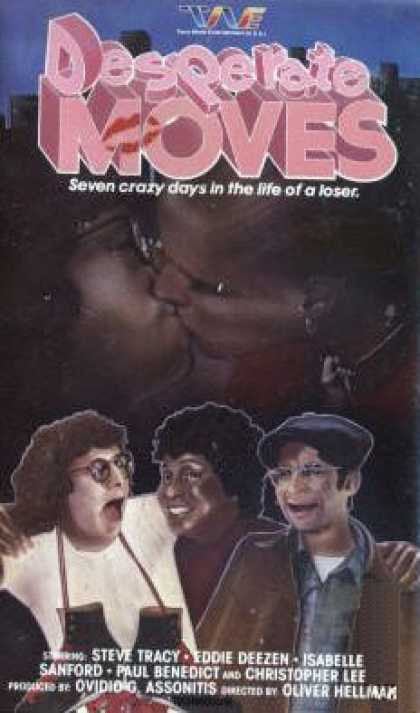 Posted by Dan Lashley at 9:26 AM No comments:

Jason moves into an abandoned train car where he resurrects the vicious
ghost of his landlady's dead husband... The Mister. After some
near-fatal encounters with the violent specter he seeks local exorcist
Vincent Tuttle.

Six Things I Learned from The Sleeping Car

1. Trains explode when they go on the wrong tracks.

2. Always practice safe hanky-panky while on a train.

3. Couch springs can kill you.

5. Ghosts will kill you over phone sex bills.

6. Pull out mattresses can be deadly.
Posted by "Cinemasochist" Justin Oberholtzer at 9:16 AM No comments:

Guess who's back? No not McMillan and Wife but your old pals at WWWofCR! In this show I try to teach Marty the wily ways to get women. Is Marty a stud or a dud? Well that's an easy answer but listen anyways!

No track listing this time, only because I downed a case of robotussin and my eyeballs just grew legs and walked away.

Posted by Dan Lashley at 2:42 PM No comments:

This isn't a complicated story, and since it's for KISS fans, that's probably a good thing (I'm a KISS fan btw). Four doofuses win tickets to a KISS concert in Detroit, but they face multiple obstacles, most notably one guy's insane Carpenters lovin' KISS hatin mom (played by the gross landlady in Kingpin). When they get to Detroit, they find out they DIDN'T win the tickets and each of them go to their own story subplots to find tickets. Spoiler: They see KISS.

1. So apparently in the 70's and somewhat in the 80's, there was this epidemic of hiring the creepiest security guards to watch our nations schools. I bet the checklist of the correspondence course included greasy hair, leering eyes, and a hankering for a hunk of jailbait.

3. Getting a priest trippin off of schrooms may be a damnable offense, but not if the priest is Joe Flathery.

4. Because of this film, Stretch Armstrong has opened up legislation on banning stretchy toys. Many kids have taken to putting bumper stickers on their power wheels that says "You'll get my toys by prying it from my cold dead hands".

5. The "Sexual" encounter between T2 kid and Mrs. Gene Simmons is exactly how 99% of my sexual encounters go.

6. I have to admit, how the guys get the tickets is a pretty damn clever way for their feeble minds.
Posted by Dan Lashley at 9:40 AM 2 comments: