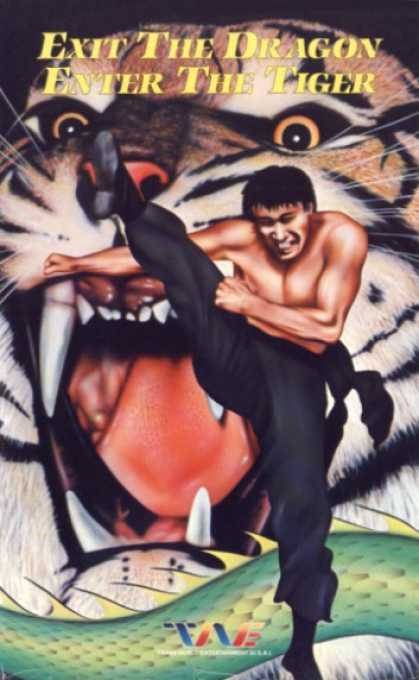 Must be the Dragon's quitting time. Hope Tiger doesn't have to work over when Crane calls out due to a hangover.

Also, that guy is in some serious pain there.
Posted by Dan Lashley at 10:14 AM No comments:

In this Hong Kong martial arts classic, A young man is known as the ultimate street fighter in his area. He's fought over 300 times and hasn't been beaten once. Of course, he doesn't realize that his rich dad is using the young man's servant to bribe the opponents into losing so he won't get hurt. This earns him the nickname of Prodigal Son. When he's beaten easily by a  very feminine stage  actor/ Wing Chun master, he decides to buy the theater company so he can be trained by the master. There's also another rich guy looking for fights, and Sammo Hung plays a goofy Wing Chun master who also tries to train the Prodigal Son.

Loaded with humor, lots of killing, and great martial arts moves. It's well worth a look at for fans of the genre.


1. Never tell your servant to attack you at random times for training. I learned my lesson when mine threw me into a lava pit. I was a hot mess!

2. It doesn't matter who does it, but the feminine actor/Wing Chun master looks like a creepy baby without his eyebrows.

3. Considering that (SPOILER) the theater group is slaughtered and the tent burned down, maybe it's best to NOT have someone in the troupe who keeps kicking people's asses. Maybe throwing confetti a lot. Rip Taylor is a blackbelt in Wig-Fu though so he's out.

4. Protip: if someone has beaten you in a fight so badly that he renders your arm useless, not amount of training is gonna prepare you when you lose both arms. Dumbass.

5. If I was the Prodigal Son, after I learned real martial arts I'd beat the shit out of all those people mocking me. I'd EARN those 300 fights back.

6. Any move can be used as a martial arts technique, as demonstrated by Hung's toilet technique. I'm currently working on a technique that involves eating pizza. Classes start soon.
Posted by Dan Lashley at 5:37 PM No comments:

Serial killer, and all around crazy laughing bastard Angus escapes from prison and instead of just getting himself some McDonalds, he starts killing. He also has a stripper sister married to what looks like a dead manatee in an open shirt. There's also a story about a female cop who takes the law into her own hands...when she's not having 8000 flashbacks to her mother getting murdered by some masked bastard.  Oh, and Tim Ritter has some serious family issues.

1.The baby food poisoner looked like a wax figure of Robert Blake had partially melted. AND IT WAS A WOMAN!!!

2. One of Tim Ritter's staples Asbestos Felt makes a brief appearance in this. His laugh is infectious.

3. Saddened that they couldn't get the rights to use the Radiohead song.

4. I don't know what reality Tim Ritter lives in, but a 45 year old looking leathery manbeast with soccer balls glued onto her chest is not  my idea of a good time. If I was in that strip club, I'd be asking HER to throw out dollars.

5. There's a tender scene where Angus and his sister visit the grave of their mother and wishes that she had been alive when he got out because he loved her so much. Nah just fucking with ya. He makes out with his sister on mom's skeleton.

6. After looking at Florida strippers, I wish they all could be California girls. Yuck.