The Watergate Plumbers, a poorly-performing college basketball team, lose their best players one by one to death and dismemberment at the hands of a mysterious masked stalker.

Six Things Learned from Night of the Dribbler

3. Your coach is the next best thing to your father.

4. Hypnosis can help you with your basketball skills.

5. Basketballs can double as bombs.

An Idaho ski wunderkind travels to a big time ski competition. He picks up an annoying hitchhiker along the way and the love/lust tension follows. He falls in with a rowdy group of skiers led by Mister Making It himself David Naughton and they take on the asshole Europeans. They even give the big downhill slope the name Chinese Downhil. Because it's slanted. Haw haw.

1. Always keep your eyes to the face when your hotel clerk walks in wearing just a smile. Manners!

2. Never take drugs and get trapped in a sauna with sleazy European people. I learned that the hard way. Couldn't sit down for a couple days and felt dirty.

3. In every ragtag group, there should always be an asian guy. And he only speaks english when he wants to know what the fuck is going on.

4. So even though the hitchhiker girlfrfriend gets mad at Idaho and leaves him, he doesn't seem the bit surprised that she pops back up like nothing happened when he clearly won the competition. She still slept with the sleazy European guy!

5. Why wasn't there a bigger deal made when Idaho clearly won the competition!? I'm sure there would have been a Sports Illustrated article about rigging skiing com...I couldn't finish that with a straight face.

6. I didn't see one damn hot dog in this film. Talk about false advertising!
Posted by Dan Lashley at 11:20 AM 1 comment: 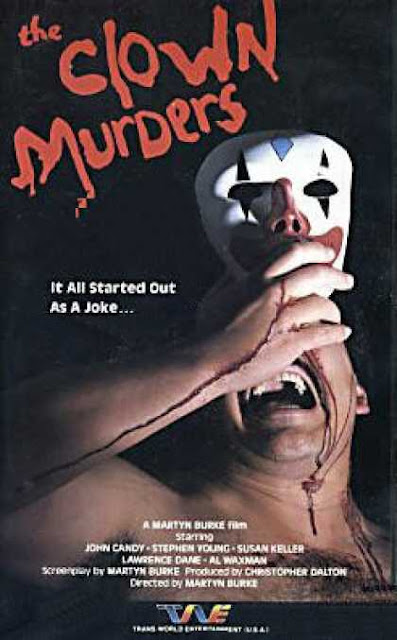 I started a joke...that started the whole clown murders. But I couldn't see, cause you  fucking stabbed me....whoooaahh...
Posted by Dan Lashley at 2:06 PM No comments:

Dan goes back down memory lane to share his thoughts on a couple of "scaaarrry" tv shows. He also decides to take some minor characters from cult movies and put them in their own films. I'd pay a good 2- 2.50 to watch em.

1. Your girlfriend can still be awesome even though she snowballed the brain dead guy.

2. Always bring more than one ball to your roof hockey games. Otherwise you'll have the cut the game short and go back to work.

3. Never let strange old men jerk off in your bathroom. They'll likely die and get raped...sometimes in that very order.

4. Don't trust a man who carries around used trach rings and pictures of gross lungs. They're either work for the chewing gum industry, or they want you to end up in a bathtub full of ice.

5. This movie showed me that women with penises was something people wanted to watch, instead of what happens at the end of every blind date I went on in the 90's.

6. As hard as I try, I still can't dance as well as Jay and Silent Bob. Bastards.
Posted by Dan Lashley at 2:49 PM No comments:

An enormous and angry 35 foot Great White Shark takes revenge on humans when they build a beach just for swimmers by a coastal town. After several shark attacks, and the Mayor does nothing to stop it, James Franisscus and Vic Morrow sail in pursuit to stop it.

5. Sharks can take down helicopters.

6. Sharks love to chow down on dummies.
Posted by "Cinemasochist" Justin Oberholtzer at 9:49 AM No comments:

We take another trip down memory lane as Dan plays some great music and trailers from the best (and worst) cult films of days gone by. Also, Dan tells his story of going to see Star Wars Episode 3! May the force be with us...please. 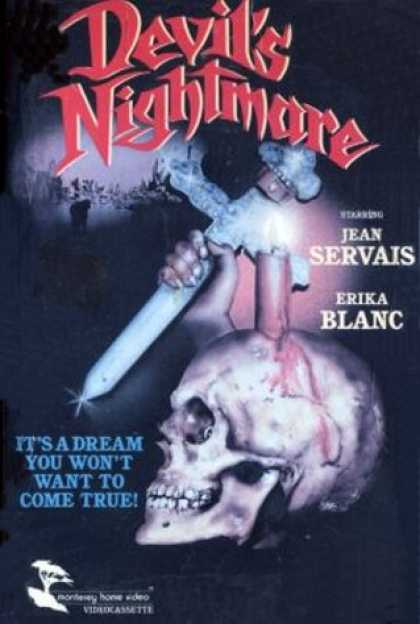 How did this movie know that I had nightmares about a skull with one arm holding a small sword while a candle on his head lights the way!? It's like they are reading my mind!
Posted by Dan Lashley at 3:51 PM 3 comments:

In this cult classic made by a fertilizer salesman, a family get lost and land at the home of The Master. They are greeted by The Master's henchman Torgo, who is suppose to be a centaur but looks more like a giant legged weeble wobble. The Master doesn't approve of this, and with the help of his six wives, tries to get rid of the family. Torgo is the true hero of this story in my opinion.

Six Things I've Learned from Manos The Hands of Fate

1.  If you make out in a car for over twenty four hours straight, you're going to have blue balls the size of a cadillac. And chapped lips.

2. I wonder who does The Master's outfit because it is FABULOUS!

3.  Why did The Master have six wives!? If he wanted a lot of women he should have done what the mafia does and have one wife and a buncha goomahs.He had six of them so he could take each one of them out one day a week and not get so bored with them. Plan ahead man!

4. Women rasslin around for 10 minutes for no real reason = Hal Warren's "special time".

5. If Torgo took care of the place while The Master is away (which means he's camping outside 30 feet away), why does it look like such a dump? No wonder The Master doesn't stay there. Use a vacuum for Manos' sake!

6. My wife brought this up, and it's a good point. There is no Valley Lodge. So who is sending people to this place? Well the women at the end says it's an agent. So Manos has his own travel agent that sends him wives. That's an agent that takes care of you.
Posted by Dan Lashley at 3:34 PM 1 comment:

Feeling a bit under the weather, Dan sends the gang home and does the show solo. Although he's not feeling well, and he's hitting puberty, Dan still delivers the goods when it comes to cult movie music and trailers.

My buddy Mike over at Badasses Boobs and Bodycounts just started up a new podcast and I was the lucky SOB who got to guest star! We talk about Onk Bak: The Thai Warrior and Nightmare City, being Twitter Buddies, and why I think Black Demons sucks.

Click below to listen! Also, read his site! This man knows his stuff!

http://badassesboobsandbodycounts.com/2012/08/13/bbandbc-podcast-ep01-nightmare-city-in-ong-bak/
Posted by Dan Lashley at 10:26 AM No comments:

QSKY is the hottest FM station in Los Angeles, with it's Tom Pettys and it's Eagles and the title track by Steely Dan. An eclectic group of DJ's led by Jeff Dugan go on strike when the higher ups want to shove army commercials all over the place. Look for a young Jimmy Buffet trying to save the whales with Livingston Saturday Night. I think the whales prefer to die.

1. It's perfectly OK to replace your buddy with a former love interest and then never really think about that character again. Ho's before Bros!

2. I enjoyed the subtle way they take on the whole marijuana issue. I think they may enjoy it. Don't quote me on that though.

3. "We've got Linda Rondstant for several songs and by golly we're gonna show her singing all of them!"

4. If a woman has white nipples, it's a cop out to not freakin show them! You know how rare they are!? There's only like three reported cases in the U.S. and one of them is a guy!

5. The DJ's have such colorful names like Mother, Eric Swann, and the Prince of Darkness. If I worked there, I'd just be called the Round Mound of Sound. Assholes.

6. QSKY is a peacful, fun loving group who enjoys smoking pot, having sex, and illegally stealing concerts from other radio stations so they can get in trouble. But I forgive them because they know Reo Speedwagon.
Posted by Dan Lashley at 2:41 PM No comments: 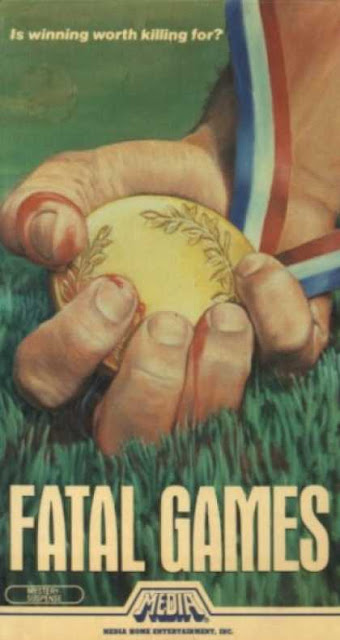 Lacking consciences because they were born during a solar eclipse, a trio of 10-year-olds embark on an indiscriminate killing spree.

1. Babies born during the eclipse are evil.

2. Graves are the best place to have sex. They’re designed for stiffs, after all.

3. It’s worth shooting someone over a hiding spot.

6. Choking someone with a rubber hose is better than beating them with it.
Posted by "Cinemasochist" Justin Oberholtzer at 12:33 PM No comments:

In our latest episode, Dan buys something from a yard sale that may allow him to create life! With his personal Igor, Marty, Dan attempts to do what countless others have failed to do...build themselves a wingman.

Posted by Dan Lashley at 5:00 PM No comments: 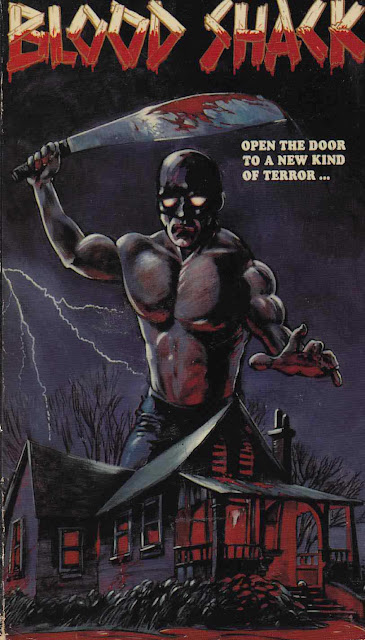 The Blood Shack is a little known place where you can be dismembered. Tin roof....psycho.
Posted by Dan Lashley at 10:01 AM 1 comment:

1. Impersonating a doctor and groping women’s breasts does not result in jail time; only detention.

2. Idaho is so terrible they must transfer their students to other states for education.

4. Commies always carry vodka with them.

6. Getting your penis stuck in a bowling ball is a comical tragedy. Comical for the audience, a tragedy for the victim.
Posted by "Cinemasochist" Justin Oberholtzer at 9:51 AM No comments: