Someone or something is killing off the townspeople and putting them into goofy poses. It's up to the unlikable and eternally confused sheriff (Kurt Angle) to find out who's behind it. But what he finds may be beyond his comprehension. I'm talking about giant dead wrestlers here.

You will believe a man can be "noodled", and I'm not talking about that time your wacky uncle made spaghetti come out of his nose from laughing too hard at the Olive Garden.

1. Nothing identifies a sheriff's car more than putting "sheriff" on the side of your truck using letters you'd put on your mailbox.

2. I love that one of the "actors" in this movie is credited as Ray "Glacier" Lloyd (he's a former WCW wrestler). I think from now on, I want to be known as Dan "Hot Coffee" Lashley. You know, because I'll burn the roof of your mouth.

3. In one scene EVERY SINGLE PERSON is wearing plaid. This film single handedly saved the plaid shirt industry.

4. I'm not sure how you feel apocalyptic, but I'd imagine it's pretty epic in nature. Probably with loud dramatic orchestra music playing.

5. This movie may very well be the greatest pairing of wrestlers and community theater actors the world has ever seen. I want to see Kurt Angle play Willy Loman in "Death of A Salesman With A BROKEN FREAKIN' NECK".

6.This film suffers from what I call "allovertheplaceitis". You got the confused sheriff talking to a crazy woman at church and a bait shop owner, you got the idiot with the ice related nickname whose best idea is to do the same thing that started this whole damn mess, and some college age dipshits with names like Hunter, Autumn, and Mackenzie who go out on a boat to meet the three dead stooges. Oh, and there's a surprise "twist" that comes out of nowhere because they NEVER FUCKING TALK ABOUT IT IN THE MOVIE!

This movie sucks. It's true, it's damn true.
Posted by Dan Lashley at 10:32 AM No comments: 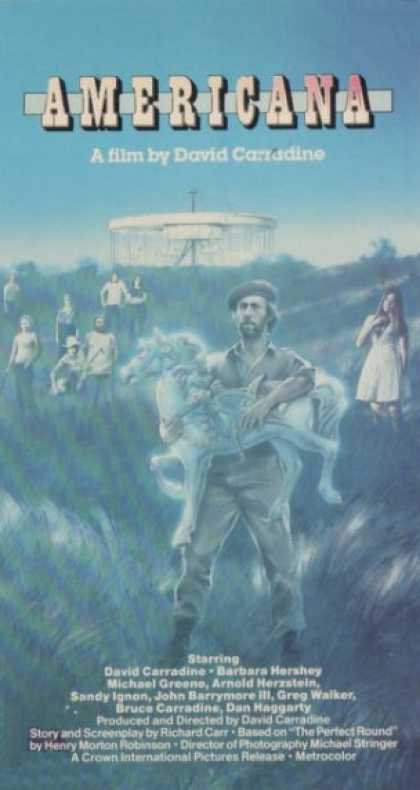 So judging by this cover, It's a story about this guy floating in midair carrying a toy horse while his girlfriend looks on. Also the crowd is not noticing the UFO so they can enjoy the rest of their Dave Matthews concert. None of this makes a damn bit of sense! Who thought this was a good idea!?

"A film by David Carradine"...nevermind.

If you've read up on your Greek Mythology (and you should, it's fantastically insane stuff) you know that Zeus can't keep it in his toga...and I can't blame him. Look, he's the head god, the big cheese, the one who makes people crap their togas when they cross him the wrong way, so there's a certain sense of entitlement there. So Zeus will slum it down to Earth in some ridiculous form...say an eagle, a tiger, or some glittery gold and tap himself all sorts of human asses. You don't need a Maury paternity test to know who the father of all those kids are.

So Zeus gets himself a human bootycall and she gives birth to Perseus.Zeus gets mad that the bootycall's father would board the woman and child up in a craftmatic nonadjustable coffinboat that he makes Poseidon let out his favorite pet, the Kraken. Perseus is the very definition of a privileged child, his dad making sure everything good happens to him. After Zeus makes her kid into the hideous lord of the swamps, Thetis starts fucking around with Perseus' girl Andromeda and you know what that means....epic quest.


Six Things I've Learned from Clash of the Titans

1. More of a question than something I've learned...did anybody ever take Harry Hamlin seriously? I know he's a good looking guy, and the world needs himbos too, but you can just look at him and see his thought process. SPOILER: there isn't one.

2. "No it's OK Ursula Andress, you don't need to do anything but stand there. No, no talking needed hon. Just look pretty."

3. The Medusa scene to this day still scares the hell out of me. You can't CGI that kind of pants wetting.

4. I was hoping Burgess Meredith would have called Perseus a bum or told him women weaken legs. But he didn't. I hope his glasses got broken.

5. If this movie is any indication, the Greeks worshiped a bunch of ego havin, cat fight givin, booty takin assholes. They would have fit in nicely in classy publications like US Weekly and the National Enquirer.

6. If I had the head of Medusa, I wouldn't have thrown it into the sea. Hell no. I'd invite every one of my enemies over to show them my new "find". I would then have the greatest set of lawn gnomes known to man. It'll say "he's particular about what he decorates his lawn with" and "don't fuck with this guy or you're gonna be a birdbath."

The Night Evelyn Came Out of the Grave VHS Artwork 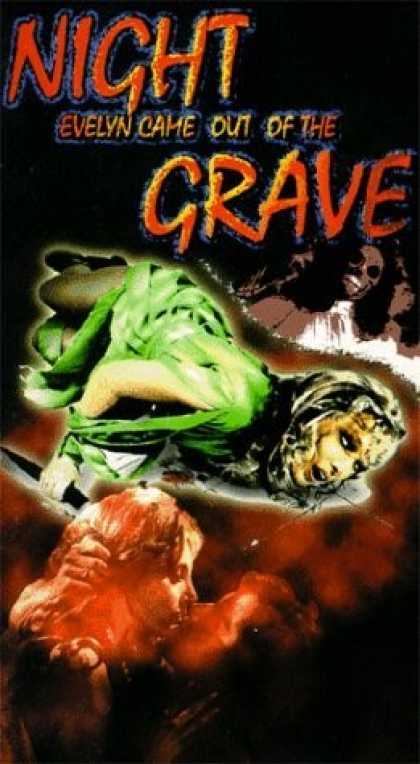 Evelyn ended up out of her grave and into the worst photoshop job of all time. Choose from three flavors...Exotic orange, gorgeous green, and OHMYGODWHATTHEFUCKISTHAT brown.
Posted by Dan Lashley at 3:08 PM No comments:

Kurt Angle, doing the worst impression of a redneck ever, runs his truck into a tree. While he tries to figure out how his "drivin' through trees" theory might have gone wrong, he finds a souvenir medal and starts killing people. It's a common reaction, I hear.

Meanwhile, we're forced to peek into the life of good ol' boy Gunnar...yes Gunnar. When he's not out with his giant buddy Animal, he's getter harassed by the Man (Tom Savini), or forcing women to mud wrestle each other. Krazy Kurt tries to kill Gunnar because he has one of those souvenir medals too. Probably because he was cramping on Kurt's fashion style.

There's also a conspiracy nut, a psychic with giant boobs, and a terrible punk band called Anti-flag.Oh yeah, Sid Vicious is driving around in a muscle car staring at you. It's as bad (or as awesome) as you think.

Six Things I've Learned From Death From Above

1. It is scientific fact that if you are thrown into a mudpit, you are unable to resist your primal urge to mud rassle. It's freakin science, man!

2. A redneck demon listening to awful punk music may be Kurt Angle's greatest role yet!

3. I'm a fan of James Storm's wrestling (He's a pro wrestler for those who don't follow wrestling) but acting may be a touch out of his reach. I dunno if it's his line delivery or the fact that it looks like he was always looking at something offscreen. Either way, sorry bout his damn luck.

4. This movie is both terrible and tremendous all rolled up together. Making horribly happy babies together. A must see.

6. If this movie did anything, it gave me a new nightmare image. Few things are as frightening as Sid Vicious sitting in a sports car wearing his "tonight...you" face.
Posted by Dan Lashley at 3:39 PM No comments:

In a post apocalypse Earth, where everything's some bizarre mashup of American Bandstand 50's and let's make everything neon 80's, this depression era dressed mercenary rescues a pop star who is kidnapped by a biker gang. Along the way pick up a manly looking woman, a cranky acting Rick Moranis, a do-wop group, and some groupie. There's your A-Team right there.

There's a lot of good music in this, although the cheese factor of this movie may block you up for weeks.

1. No matter how badass your fighting skills may be, nobody is going to be intimidated by a bad high school mustache.

2.When ever the lead villain is a biker, always make sure your hair is as ridiculous looking as possible. It shows that you're so badass, you don't care that you look like a hawk that had sex with a human female.

3. I love that the "hero" puts together a team made entirely of annoying people who hate each other. That's some skills right there.

4. No matter how much I wish it, the Baseball Furies from Walter Hill's The Warriors are NOT going to show up and beat everyone with baseball bats.

5. This movie taught me that if you get into a one on one fight in the middle of the road with a crazy biker gang leader who brought all his biker buds, the best thing to do is call on Bill Paxton and his army of gun toting bird people to back you up.

6. The ending scene/song is awesome, with pretty much the whole cast on stage (minus our "hero"). I just wished that the two main bad guys (played by Willem Dafoe and Lee Ving) would have had a change of heart and jumped onstage, smiling and singing with the do-wop group and Dianne Lane. Would have made it 5 stars in stead of just 4 1/2 stars.
Posted by Dan Lashley at 11:04 AM No comments:

Exotic Eastern European beauty, Linda Allen, flies in to Los Angeles to track down the evil mobsters who tortured and murdered her sister. Meanwhile, the mobsters are trying to find a tape with information that would be incriminating to them. Linda's investigation deals with a pimp who may be the murderer she is after, and a helpful FBI agent who may not be the crime hunter he pretends to be. Cunning and deadly she is, but will she be up to the tangled web of corruption, violence, and death she falls into?

1. Linda can leap on cars, do kung fu and handle a gun, but acting is not one of her strong suits.

4. Stealing a teddy bear will result in a gun pointed at your head.

5. It’s easy to evade the cops. Just stay slightly out of their view.

6. Cute girls make the best bullies because you can’t hit them back.
Posted by "Cinemasochist" Justin Oberholtzer at 10:01 AM No comments: