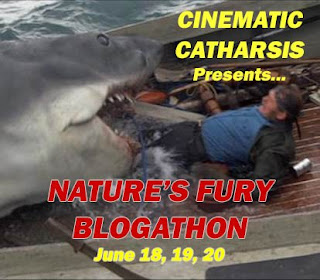 For this special review for the Nature's Fury Blogathon I decided to call in a few favors and have longtime conservation icon Smokey the Bear join me for this review. His comments will be in italics.

Smokey, I want to thank you for helping me out today. Been a big fan since I was a wee lad in the late 70's.

Don't put it that way! It makes me sound old. *laughs*

*laughs* You're only as old as you feel right?

That's true. Dan, I'm glad you asked me here today because I've wanted to talk about this movie for a long time now.

I was not aware of that.

Oh yeah. There are some points in this film that I think need to be closely looked at today.

You mean the movie Grizzly, directed by the late William Girdler in 1976, which stars Christopher George as a park ranger that has to deal with a huge killer bear...

Let me stop you there. That's exactly what I'm talking about.

No, I'm talking about this ridiculous notion that the title character in this film is a savage ruthless killer, when in fact he's the victim in this.

Did we watch the same movie? Because I seem to remember the bear being the "bad guy" so to speak in this. I mean, this is after all a Jaws ripoff. An entertaining one for sure, but one nonetheless.

Why is the bear the bad guy, if I may ask?

Oh I don't know, maybe walking around and eating a bunch of people.

There's the key word, "eat". Bears, like all other living beings, need some sort of food to survive, correct?

This so called "killer" needed food to live. And in the woods, sometimes food can be scarce to find. I know I had this one weekend where I was so hungry I ate a tree. You ever eaten a tree?

It sucks. So this grizzly is scared and hungry, and here are these humans invading his natural habitat. So of course a bear's going to get desperate. If he hadn't been starving, he probably would have just let those folks know how to put a campfire out when they left.

With all due respect, I think you're overthinking this a bit.

You need to check your human privilege, meat bag.

You heard me, asshole. You sit there all smug in your clothing and your hairless bodies...

You obviously haven't seen my back.

...Gross. Anyway, you humans have done everything in your power to keep the mighty bear down. Putting us on unicycles, making us wrestle humans, hell even making me wear pants and this dumbass hat. I want my little grizzly to swing free like NATURE intended.

I'm getting a bit uncomfortable with this, man.

Do I look like your "man"? So you're uncomfortable? GOOD! You should be!

I don't know what sort of power you think I wield over the bear universe, but I'm not the one doing those things. I just watched this movie, which we're supposed to talk about.

Yeah you watched. And you did nothing about it. Which makes you as bad as Christopher George. How's THAT for talking about the movie!?

Creative, I admit. But why hate on Christopher George? I mean, this is just a movie! And didn't he cater to the bears by posing nude in Playgirl back in the 70's?

That's an entirely different kind of bear, you moron.

It is? Huh. So what I was saying is, you're using a movie from 1976 to prove that there is some human agenda to suppress bears?

You damn right there is.

But you've spent decades helping humans to protect themselves from fires.

I'm not trying to protect you filthy meat bags! I'm trying to make sure you fucknuts don't burn down the woods and kill all my relatives!

OK, so you want to go down this road, I'm willing to do that. I'd like to mention a certain famous bear that's been allowed to commit crime after crime without any sort of jail time. I'm referring to one Yogi the bear.

Do you or do you not admit that Yogi has been caught, on film no less, multiple times stealing?

Yes, but it was only picnic baskets.

It's not the same thing. You can just go to the grocery store. You ever see a bear in a grocery store? They constantly eye you while you try to find the ripest melons.

Alright then. I want to bring up something about this movie that really bothered me. In this film, the grizzly kills several people, correct?

Self preservation, but yes.

I found it quite telling that other than the two main supporting characters, played by Andrew Prine and Richard Jaeckel, and one other ranger, that all the other victims were women?

What do you mean?

What I mean is, it sure seems like that poor ol' lil grizzly bear sure likes bumping off the ladies. I tend to find that just a wee bit sexist.

I don't know. Ripping ladies' arms off, using one as a chew toy in his mouth. Oh, and let's not forget when he mauled that MOTHER who trying to save her CHILD from being an appetizer for this misunderstood bear.

I see what you're doing there, and you're an asshole.

A toddler, Smokey. Petting a damn cute little bunny rabbit. Did the bear wipe his ass with the rabbit afterwards?

I don't have to take this shit. I'm leaving.

I think that's for the best. Maybe it's best not to meet one's heroes. They always seem to disappoint.